U.S. stock futures are creeping lower this morning as traders digest yesterday’s rate cut decision. As widely expected, the Federal Reserve cut their target for the Fed Funds rate range to 1.5%-1.75%. Given the month-long run by stocks, any consolidation up here is healthy.

Ahead of the bell, futures on the Dow Jones Industrial Average and S&P 500 are down 0.2%. Nasdaq Composite futures have lost 0.06%.

In the options pits, put trading lifted by a few million contracts but still fell short of call activity. Approximately 19.3 million calls and 17.3 million puts crossed the table on the session.

With the distance between both vehicles narrowing, the CBOE Volatility Index (VIX) single-session equity put/call volume ratio rallied to 0.6. Meanwhile, the 10-day moving average dipped to 0.64. 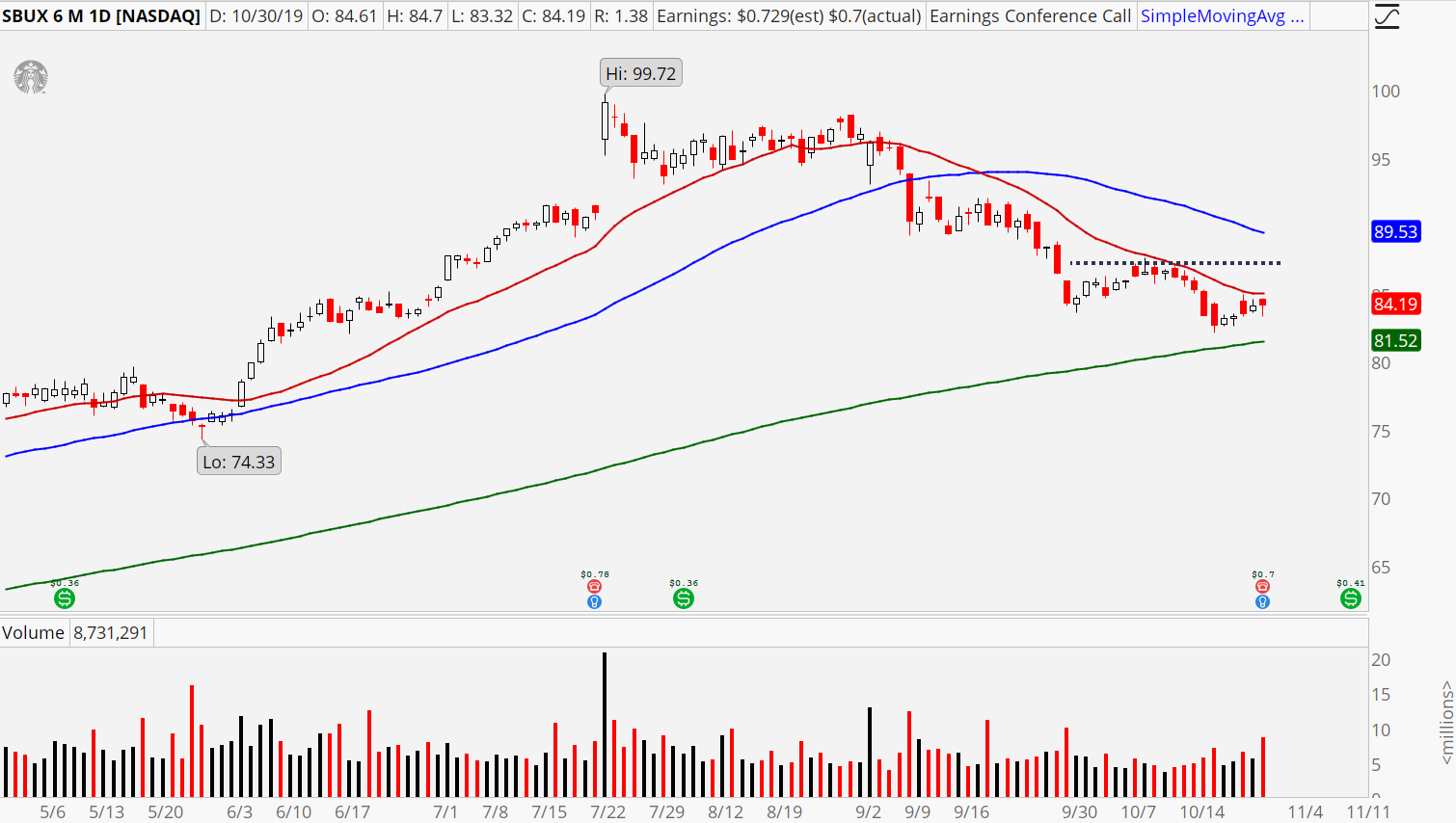 Shareholders approached yesterday’s quarterly report with high hopes that the event would halt the stock’s slide. In the past three months, SBUX stock has fallen 13%, reversing both its short-term and intermediate-term trends.

Fortunately, those wishes were well placed. The ubiquitous coffee chain topped estimates, aided by a 5% growth in global same-store sales. For its fiscal fourth quarter, Starbucks earned 70 cents of adjusted earnings per share on revenue of $6.8 billion. Wall Street analysts were forecasting earnings of 70 cents and $6.7 billion in sales.

SBUX stock is pointing toward a 3.3% gain at the open. The jump to $87 will push it directly into overhead resistance, testing sellers’ resolve to defend the fresh downtrend. If the ceiling gives way and SBUX stock rallies past $87.50, the short-term downtrend will officially end.

Options trading ahead of the number heavily favored calls. Activity swelled to 349% of the average daily volume, with 115,984 total contracts traded. 74% of the trading came from call options alone.

Premiums were looking for a move of $4.06 or 4.8%, so this morning’s small pop arrived well within the expected range. That should result in quick profits for traders holding short volatility trades into the event like iron condors and short strangles. 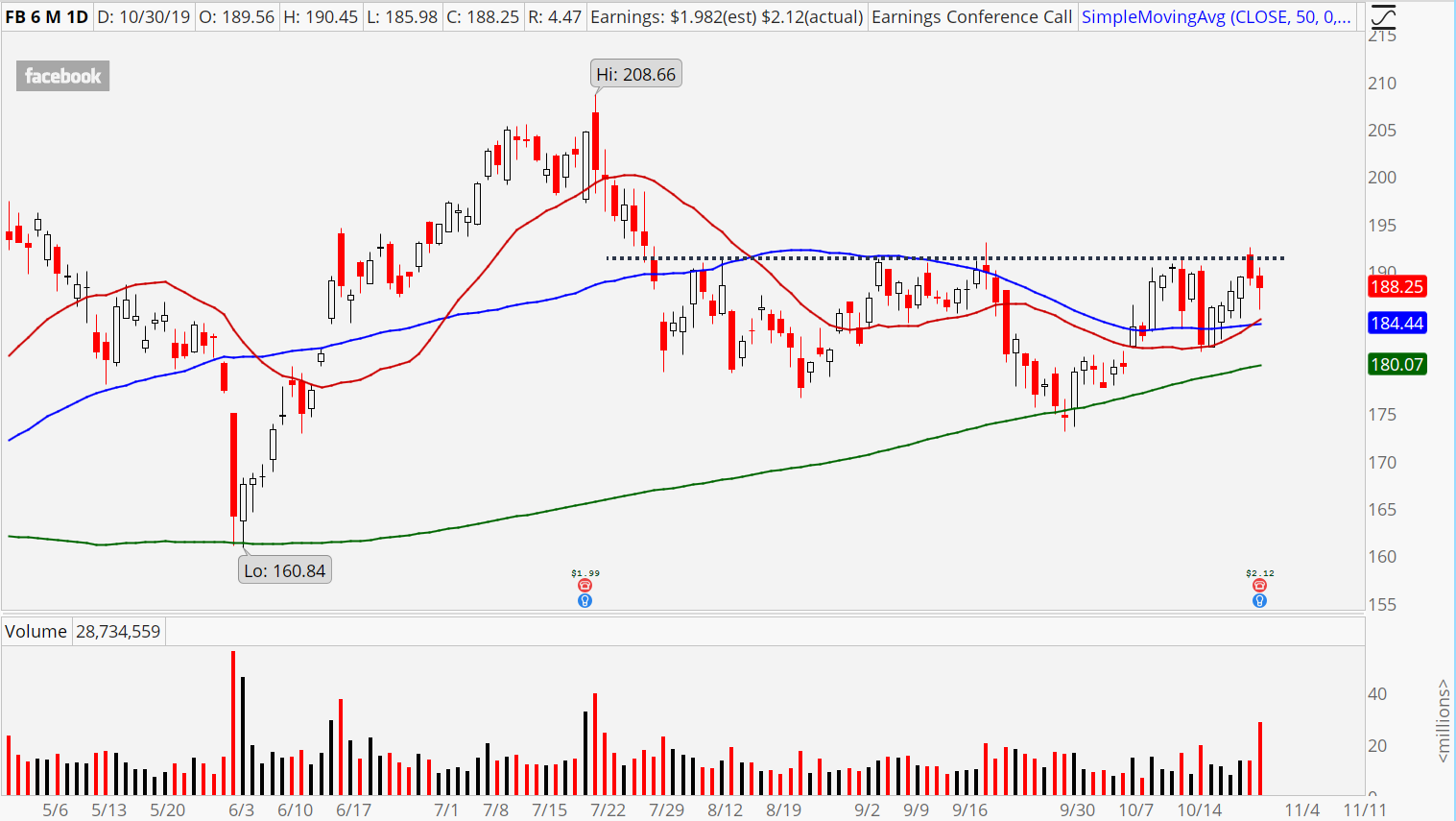 Facebook stock is popping 4.1% this morning on the heels of better-than-expected earnings. Revenue ramped to $17.7 billion and translated into earnings of $2.12 per share. The Street was estimating earnings of $1.91 on $17.4 billion in sales, so chalk this up as a solid beat.

The 4.1% jump to $196 will deliver a clear breakout at the open. Previously, resistance at $192 had been keeping a lid on the stock. Multiple attempts to breakthrough over the quarter failed, adding significance to the price zone. The setup reminds me of Intel (NASDAQ:INTC), which jumped above key resistance after earnings resulting in a strong upside follow-through. I think FB stock could see something similar.

On the options trading front, calls ruled the roost ahead of the event. Total activity rose to 264% of the average daily volume, with 551,940 contracts traded. Calls drove 64% of the day’s take.

The expected move ahead of last night’s news was $10.85 or 5.8%. That places this morning’s 4.4% gap well within expectations. Once again, volatility sellers win the day. 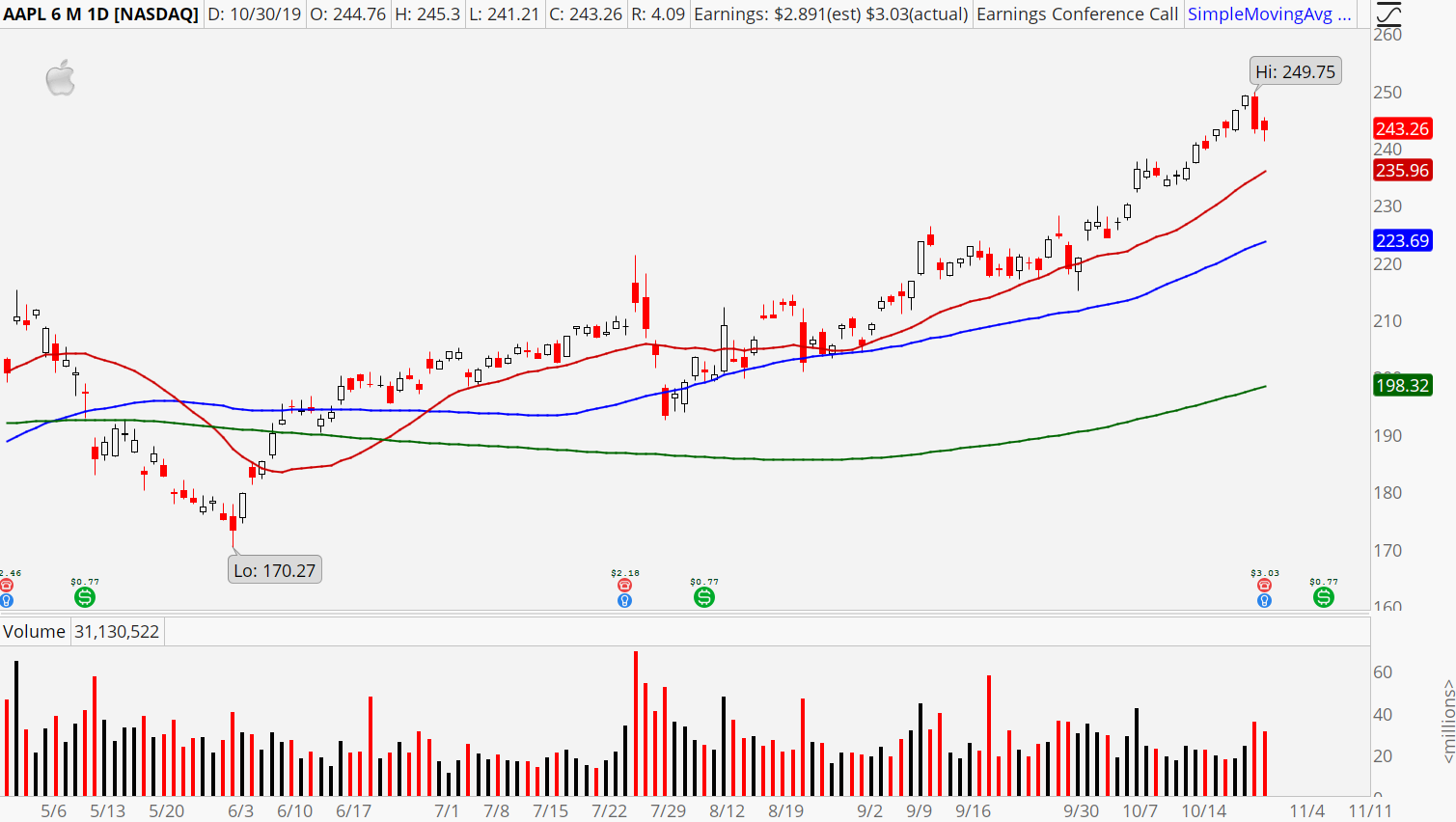 The last big name topping the most-active options list was Apple. Its catalyst was earnings as well, and like its predecessors, the stock is reacting favorably to the numbers. AAPL stock gained 10% this month and climbed to record highs after the earnings report, so it’s fair to say expectations were running high.

For the quarter, Apple earned $3.03 per share on revenue of $64 billion. Analysts were calling for earnings per share of $2.84 on $63 billion. iPhone and services sales also topped estimates at $33.4 billion and $12.5 billion, respectively.

AAPL stock is up $3.44 or 1.4% ahead of the opening bell. Even if the small gap fizzles, its stock chart boasts such a beautiful uptrend that you have to view any dips as buying opportunities into year-end.

On the options trading front, the contest between call and put popularity was close. Activity ticked only slightly higher to 138% of the average daily volume, with 739,964 total contracts traded. Calls pushed ahead of puts by a slim margin, adding 51% to the session’s sum.

The $3.44 gap falls well below the $10.61 that options traders were baking in. Expect a windfall for volatility sellers at the open.

As of this writing, Tyler Craig didn’t hold positions in any of the aforementioned securities. For a free trial to the best trading community on the planet and Tyler’s current home, click here!